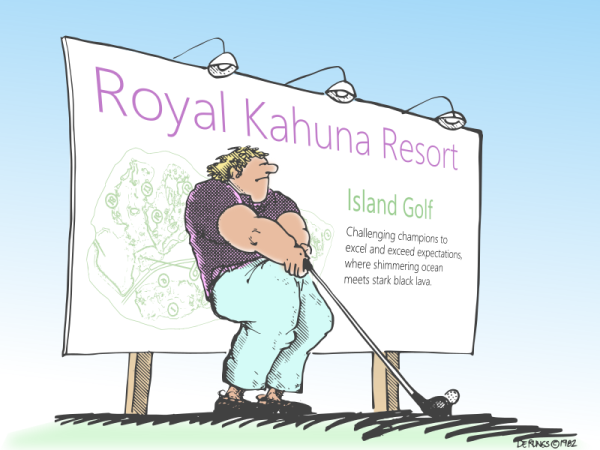 His colleagues called him "An under par guy.
A maker of deals no mover would buy."

His motor, they joked, was stuck in reverse,
until their deals took a turn for the worse.

Their future relied on his secret sauce.
A new recipe would lighten their loss.

A day's flight away, out on holiday,
he went with the flow the Hawaiian way.

Inclined to hang loose, and welcome some sport,
he sought out patrons around his resort.

A golfer at heart, he gave them a call,
and planned out a game productive for all.

They teed off at dawn, to freshly mowed turf,
a mild trade wind and breathtaking surf.

No woods were on fire. No irons were hot.
Most chip shots were shanked, and putts missed a lot.

But, like a true pro, he helped them pick clubs,
and gave them new ways to laugh at their flubs.

Without monkey-shine or marketing gloss,
his virtue alone got points across.

And with a strong grip on strategic facts,
he landed their trust and hefty contracts.

His Kahuna style and aloha way,
had hit the sweet-spot that carried the day.